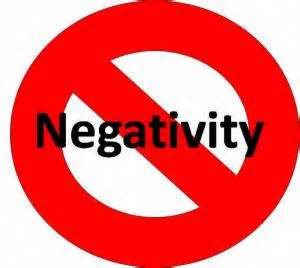 I’m sometimes asked whether all negativity should be avoided in copywriting, particularly advertisements.

I’m not talking about ‘knocking’ ads, where a negative aspect of a competitive product or service is highlighted. Depending on the circumstances, this can either be a good or a counter-productive approach.

No, in most cases, the person is referring to the highlighting of a problem; one which the product or service will solve. In a few cases, it’s simply the use of the word ‘no’, ‘not’ or so forth, particularly in a headline.

It’s a curious kind of question, and one which, I believe, misses the point. What’s ultimately important is what people take out from an ad, not the first thing they read.

If highlighting a negative is the best way in – the most relevant and attention-grabbing, then it’s worth going for. Just make sure that the outcome – the championing of what you’re selling – is the end result. For example, I used a negative word in a press ad for Quad hi-fi – you can see it on my advertising copywriting page. It worked well, I’m glad to say, because the overall take-out was positive.

Think about it. Some of the most famous ads in history would never have seen the light of day if they had been rejected for use of negativity or negative words. “If only everything was as reliable as a Volkswagen” only works as the denouement to a negative set-up. (Actually, since the VW emissions scandal, the line has become toxic, but that’s another story – for many years before, it worked brilliantly.)

Similarly “Nothing works faster than Anadin” uses a dread negative word straight off. Mind you, if you were to take an obtuse, overly literal interpretation of that line, I suppose you could argue that it’s a good idea to take nothing. But that’s also a subject for another day.

Freelance Copywriter in London, UK
View all posts by Peter →
This entry was posted in Advertising copywriting and tagged negativity. Bookmark the permalink.