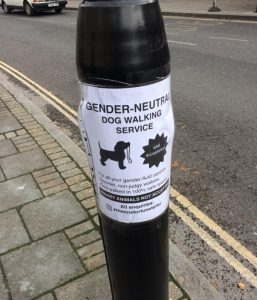 This is the first in a series of posts looking at some simple examples of good, bad, clever or weird marketing I’ve come across in everyday life, mostly in and around my home patch of North London.

This A4 poster appeared in my neighbourhood not so long ago. Was it a genuine ad? (There are a lot of dogs – and dog walkers – around where I live.) Was it a prank? Was it taking the mickey out of the ‘right-on’ Stoke Newington citizens? Or was it something else?

It turned out that it was posted by Instagram user #themisfortuneteller, who seems to specialise in offbeat cartoons presumably to promote his account. It ended up getting numerous ‘likes’ – and more comments than all of his other posts put together. So in one sense it worked.

Some of the commentators saw and appreciated the intention of it being a joke. Many others didn’t. After defending the posters (and they apparently went up across several areas) for some time, #themisfortuneteller had had enough and apologised for anyone who felt disrespected by the posters.

Is all publicity good publicity? Maybe. Maybe not. What do you think?