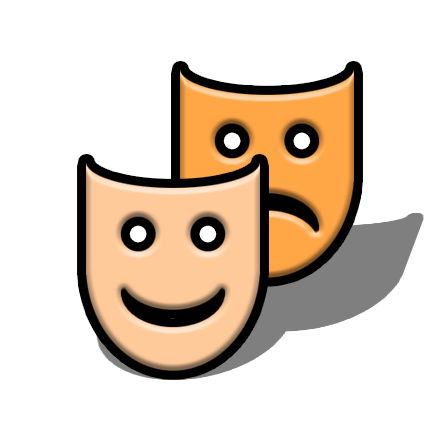 The first was a tiny production set in Abney Park Cemetery, which my wife and I went to. It was a one man show, written and performed by Simon de Deney, called Between the Lines. It was set in the First World War, and featured quotations from some of the Great War poets, although the bulk was written by Simon himself. There were fewer than 20 of us watching, but all, I think, greatly enjoyed the play and found it thought-provoking and moving.

Then a few days later we saw a production of Great Britain at the National Theatre, starring Billie Piper and a large talented supporting cast of well-known actors. It was written by Richard Bean, and was  a satire on tabloid newspapers and various scandals, particularly phone hacking, and launched the day after the trial where Andy Coulson was found guilty and Rebekah Brooks acquitted of phone hacking, among other charges  Where Between the Lines was moving, this was laugh out loud funny, brilliantly done. Thought-provoking yes, to an extent, but mainly one of the funniest plays we’ve ever seen.

In between those two productions my wife and thirteen-year-old daughter went to see a midnight production of Titus Andronicus at the Globe Theatre. (My younger daughter totally gets and loves Shakespeare. In fact she even started a blog on the Shakespeare plays she’s seen, which she sadly had to discontinue as she was attracting some unwelcome attention from middle-aged men who seemed more interested in her than the playwright.)

This production too was apparently brilliant. And what was going on off-stage was almost as entertaining as what happened on it. Titus Andronicus is an extremely bloody play, involving much beheading, cutting off of hands and other gore, all very graphically re-enacted.  Over 20 people fainted. Others were sick on the spot. Others still had to rush out as it was all too much. My wife and daughter, I’m pleased to say, were made of sterner stuff and had a great time.

All in all, not bad for a single week in the life of London Theatre. Tragedy, comedy, shock and revulsion. That’s the power of great writing for you.